When dictatorships lose any modicum of shame: When the UPDF was turned by Museveni into an institution of shame: whatever happened to the gun exhibits in Robert Kyagulanyi a.k.a Bobi wine fabricated treason case 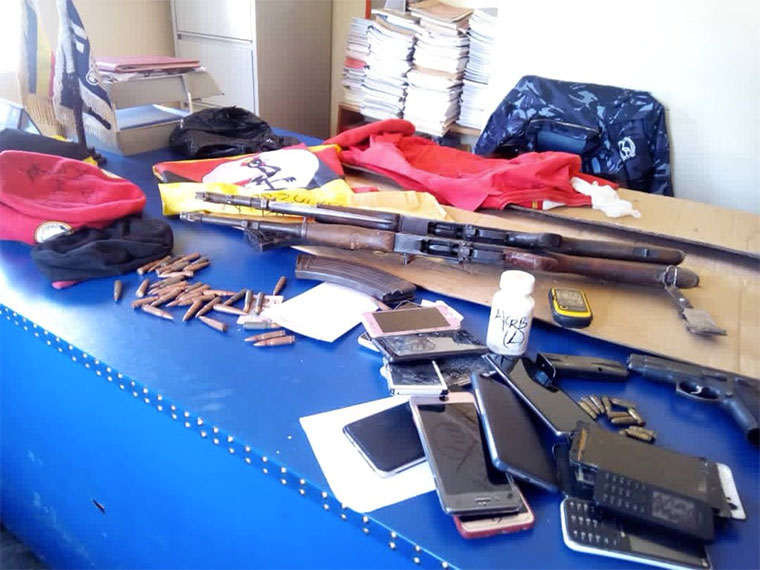 There's uncertainty on the whereabouts of the two rifles and ammunition allegedly recovered by operatives of the Special Forces Command (SFC) from a hotel room occupied by Kyadondo East MP Robert Kyagulanyi in Arua last month.

The guns were paraded in Arua and later used to justify the initial charge of unlawful possession of firearms and ammunition, for which Kyagulanyi also known as Bobi Wine, was arraigned before the General Court Martial. The charges were later dropped, before the popular legislator was charged with treason alongside 32 others.

According to a source in police, investigators in the cases related to the chaos that preceded the parliamentary by-election in Arua incident, have received neither the file nor the exhibits that were being used by the Army court in Gulu.

"Up to now we are waiting for the file and the guns to be given to the investigators so that the case of being in unlawful possession of firearms can move forward," the source said.

One of the senior investigators at the Kibuli based Criminal Investigations Directorate (CID) who spoke on condition of anonymity says none of the people investigating the Arua incident has had a glimpse on the paraded guns.

There are about five police officers in the entire force that have looked at the guns. That is the West Nile region police spokesperson Josephine Angucia and the suspended Regional Police Commander (RPC) Jonathan Musinguzi as well as the scene of crime officer in the region and two crime intelligence personnel," the senior detective said.

However, the spokesperson of the ministry of Defence and UPDF Brig Richard Karemire said, there was no way the guns could still be in the hands of the UPDF since the same exhibits are to be used in the treason case already before the Gulu Chief Magistrate's court.

"You can’t separate the guns from the file. The case has a file, so when you drop a case, you drop it together with the file…The investigation on the treason case continues. Definitely the police keeps the guns," said Karemire.

Police in Arua town paraded two AK-47 riffles with 30 rounds of ammunitions each alleged to have been picked from Bobi Wine's hotel room at Hotel Pacific.  They also paraded a pistol with eight rounds of ammunition which belongs to newly elected Arua municipality member of parliament Kassiano Wadri, several mobile phones, red caps, T-shirts, among other items.

Two days later, Bobi Wine was charged before the General Court Martial chaired by Lt Gen Andrew Gutti with being in possession with warfare material a reserve of the armed forces.

The Police spokesperson of north-western region, Josephine Angucia, says 35 people, including Bobi Wine and Wadri, are all under Police custody.

Kyadondo East MP Robert Kyagulanyi (aka Bobi Wine) is being held on charges of treason and inciting violence.

Malicious damage to the motorvehicle belonging to the convoy of the President is another charge that the MP is facing.

The Police spokesperson of north-western region, Josephine Angucia, told reporters on Wednesday that Bobi Wine and Arua Municipality by-election candidate Kassiano Wadri were arrested on Monday and Tuesday respectively and they are currently under Police detention.

She said 35 people, including Bobi Wine and Wadri, are all under police custody.

"Kassiano Wadri was arrested with one pistol, which had 12 rounds of ammunition(...) It was found with him during the time of his arrest. He even confessed that he is licensed to have it.

"Investigations are ongoing, witnesses are making statements, a case file is in the process of being filed, and then later on, appropriate action will be decided," said Angucia (pictured).

The two submachine guns were found in a room at Pacific Hotel where the legislature was living.

One had 16 rounds of ammunition and the other 19. Police also recovered 46 white tablets suspected to be drugs. 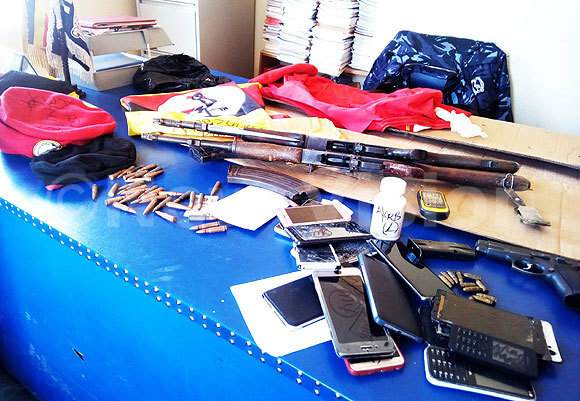 Altogether, 75 rounds of ammunition were recovered. The pistol was found in Wadri's possession.

Arua Municipality went to the polls on Wednesday to find a replacement for MP Ibrahim Abiriga, who was murdered on June 8 on his way to his home.

As many as 12 candidates, including two independents, are vying for the vacant parliamentary position.

The Kyadondo East Member of Parlaiment Hon. Robert Kyagulanyi has had the possession of firearms and ammunition charges against him dropped, but re-arrested and straight on driven to the civilian court in Gulu where they read to him the treason charges.

The Chairman of the Court Martial Lt. Gen. Gutti had this to say while dropping the charges'

As Bobi Wine with the help of his brother Eddie Yawe and other colleagues made their way out of court, he was told by his lawyer Medard Ssegona that he was still under arrest and that, they were heading to another court. He asked him to be strong.

The Kyarenga singer who looked knackered as he walked with a single crutch was guided to a waiting white police vehicle that drove him to the Magistrate's Court in Gulu. In the police car, he was in the company of his dear wife, Barbie Kyagulanyi.

While in court, Bobi Wine tried to put on his red beret, but was stopped by the prison officers. The Magistrate who first claimed that Bobi was aged 22, but later admitted that it was a slip of the tongue read to him the treason charge. It is a capital offence and the accused was not allowed to enter into a plea, it was suggested that Bobi be remanded till August 30 when the other suspects would return to the very court.

His lawyer Medard Ssegona chipped with a prayer that the legislator be remanded to a hospital where he can receive treatment, plus other co-accused who were in dire need of medical attention to be referred to a private medical facility. "Fairness demands that you try a person who is in good health," Ssegona added.

In respect of his health, Bobi Wine and others in similar conditions were allowed to receive medical attention at their preferred medical facilities. The case was adjourned to August 30, 2018.

Bobi Wine was driven off in a prison's vehicle.