When the Poor struggle to get justice from Uganda’s Temples of Injustice : The sad case of Shamira Nalweyiso who has accused Bishop Patrick Makumbi of Lweza International Healing Centre of defilement

I have noted with concern the Judiciary’s false claims that social media reports about the Kajjansi Grade 1 Magistrate’s conduct in case FJ 013/16 are misleading.
It is so surprising that a reformed and truthful Judiciary over-seeing Temples of Justice can respond with such blatant lies and all due impunity to Social media reports about the Kajjansi Grade 1 Magistrate, Hope Bagyenda’s conduct: canceling the accused’s bail without considering their plights and all circumstances surrounding the case.

When the Judiciary lies to cover up its own rot, then there is not only need to worry, but great need for the every right thinking to rise and do something toward sorting the mess. Today it is Shamirah and Peace, tomorrow it may be you or someone you greatly love.

Police detectives investigating a defilement case that was brought against Bishop Patrick Makumbi have finally taken the victim to Butabika Hospital for mental check up as recommended by Kajjansi Court State Attorney, Alpha Ogwang.
Ogwang allegedly tasked the investigating officers to subject the victim to mental checkup when he discovered that most of the evidence she presented was full of controversies. Makumbi pastors Lweza based International Gospel Healing Center.

Peace Nnaalongo Nanangwe, the mother to the victim and a resident of Namugongo, dragged the man of God to Kajjansi Police alleging that he had defiled her daughter. As a result, Police kicked off the investigations into the matter and a case file vide of reference SD: SD: 13/18/06/2016, was opened up against the suspect (Bishop Makumbi)

A source at Kajjansi Police intimated to us that when they took the victim to Butabika, Doctors proposed to remain with the victim for over one week so as to enable them observe her characters to ascertain whether she has any mental disorder as its suspected or not.

“Surprisingly, her caretakers turned down the doctor’s proposal insisting that their daughter does not have any history of mental sickness and therefore, there was no reason for her to keep at Butabika. We are now pondering the next move because most of our efforts have been frustrated by the complainant themselves,” one of the detectives said at Kajjansi on condition of anonymity.

Other documents seen by Red pepper show the girl is in primary six while others show she is in primary seven and aged 16  yrs.
While as the victim’s mother wants her daughter be called Shamira Kirabo Nalweyiso, when she (victim) shifted from Pastor Michael Kiganda’s church to Shiroh Discipleship Church under unclear circumstances, she changed her names to Swabra Kirabo, yet on some medical forms, she appears as Shamim Nansubuga!

The victim claims that she was defiled by Bishop Makumbi from one of his rentals in Lweza-Kajjansi but when she was asked to lead the police detectives to the scene, she contradicted herself  and said, she had been defiled and raped  from  tycoon Basajjabalaba’s new apartments located in Bwebajja, along Kampala-Entebbe road.  On reaching the apartments, private security guards who were found at site denied having seen or let anyone enter in any of the said buildings since they are still under construction and therefore, not yet occupied.

“Whenever she is called to make a statement, she keeps on changing them. Today she will tell you I was defiled, raped, another day she will tell you that she was taken to the lake shores to feed on human-blood among other stories,” a security source said on condition of anonymity.
The mother claims Makumbi allegedly defiled her daughter in January and even impregnated her before she later aborted in the same month.

On the 3rd, August, 2016, a medical examination report that was carried out from Mayfair Clinic shows that basing on her development (Shamira Nalweyiso), she is aged years and has no any injury in both; upper and lower limbs, no hymen, rapture or injured genitals seen, or any abnormal recent virginal discharge, to prove that she was either raped/defiled or ever aborted. The report further shows; the girl (Victim) is sexually active which means she is not a virgin and the raptures are not of the recent.
Meanwhile, police sources intimated to us that there could be a group of people helping both; the girl and the mother, in ‘cooking’ the defilement story against the man of God because their  statements don’t match at all.

“We are working around the clock to ensure that the core about the truth that surrounds this case is reached at and whoever is responsible will be brought to book,” one of the detectives said on condition of anonymity.

https://www.redpepper.co.ug/makumbi-defilement-case-in-new-twist/
The case in which Bishop Patrick Makumbi of the Lweza based Gospel Hearing Centre is accused of defilement has taken a new twist.
Bishop Makumbi is accused of allegedly defiling a 16year old Nalweyiso Shamirah alias Nansubuga Kirabo which led to a pregnancy and abortion. The matter was reportedly filed by her mother, Peace Nanagwe at Kajjansi Police Station under reference number CRB-587/2016.
Consequently, the public raised concerns on how this matter has been handled, thus alleging that Kajjansi court grade one magistrate Hope Bagyenda was frustrating the defilement case in Makumbi’s favour.
However, in a statement released by the Chief Registrar, Judiciary, Paul Wadeya Wolimbwa, there is no defilement case against Makumbi that has been filed or brought to the attention of Court to date.
“Instead Bishop Makumbi’s name is mentioned in the particulars of an offence of “Giving False Information” contrary to Section 115 (a) of the Penal Code Act before Kajjansi Magistrate’s Court.
According to the statement, it is alleged that the complainants; Kirabo and Nanagwe gave false info to D/cpl Aramathan Kazaala Attached to Kajjansi that Makumbi defiled, impregnated and forced the former to abort with intention to have him arrested so as to divert his time and services to the investigation of such information.
“The power to institute criminal charges, prosecute and discontinue anybody lies with the DPP. As an independent and competent institution charged with dispensing justice for all, we do not accept any suggestions that the judiciary is a corrupt institution, except where such claims are supported with undisputed evidence,” Wolimbwa added.
Posted by Kizitomg at 06:13 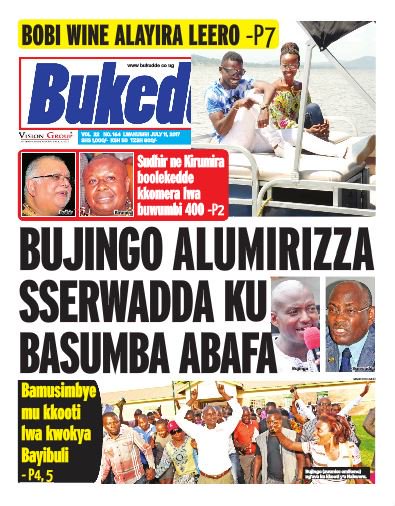 On Tueday 11th July, 2017 Bukedde news paper reported Pr.Bujingo’s  attacks against Pr.Sserwadda. Pr. Bigingo accused Pastor Serwadda of being behind the death of late Balabyekkubo and  the late Pastor Michael Mugerwa. Pr.Bujingo also said that a number of elders that disagreed with Pr.Serwadda ended up dying. This is carnality of the highest order . Pastor Bugingo is not honest in his fight. He is also after power and money like all prosperity pastors .