‘Jesus’ arrested in Luweero, police say he was behaving suspiciously 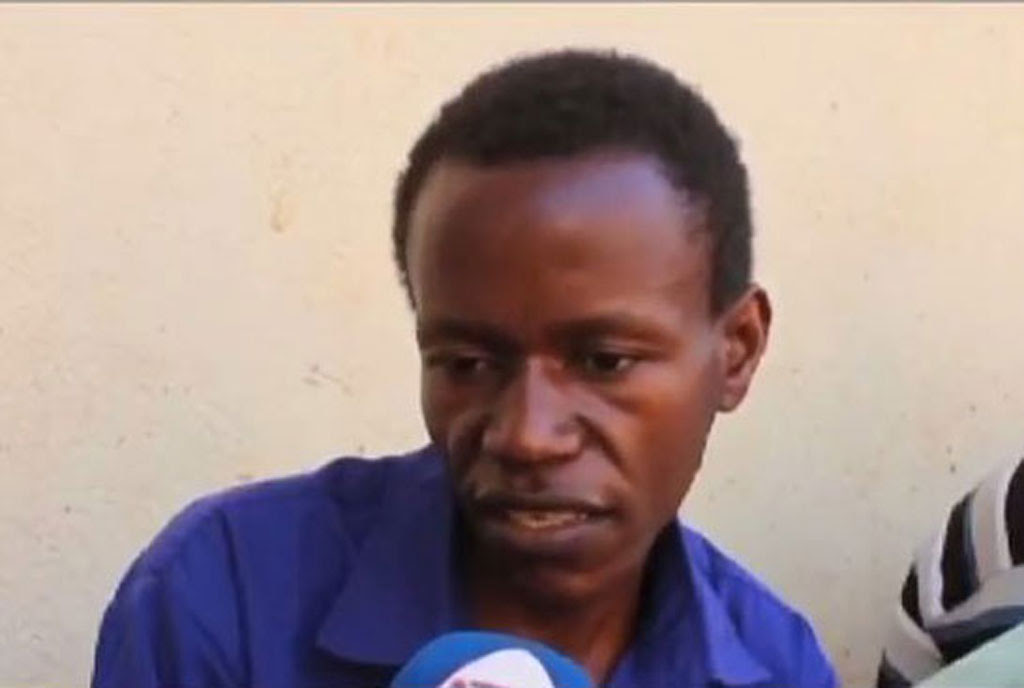 ‘Jesus’ arrested in Luweero, police say he was behaving suspiciously

Police in Luwero is holding a man who claims to be Jesus Christ.  Solomon Semakula aka Elosam Emmanuel Prince Michael was arrested on Monday evening alongside three other people at Kikaabya village in in Bamunanika sub county, Luwero District.

Gideon Byomuhangi, the Officer in charge of Wobulenzi Police Station confirmed the arrest.
“He was calling himself jesus Christ and we responded to the invitation of the locals of the village in which he stayed. So when we got there, we found that what he was doing, putting on blue things only, blue sandles, walls painted blue, carpet blue, We tried to be inquisitive to find out why he was behaving like that.

He said he wore blue, because the sky is blue. And he told us he is the true son of God called Jesus Christ and was born of the spirit, not by man.
Semakula was first arrested in 2016 in Kapeka sub county, Nakaseke District and was charged with belonging to an unlawful society.
We have just discovered that he was once arrested in Nakaseke and he was charged in court for leading groups of people which are against the law

Man claiming to be ‘Jesus Christ’ re-arrested, remanded to prison


By DAN WANDERA
The Chief Magistrate’s Court in Luweero District has remanded a man for allegedly calling himself ‘Jesus Christ.’

When arraigned before the court’s Chief Magistrate Juliet Hatanga on November 9 on charges of belonging to an unlawful society contrary to section 56 (1) and 2 (a) of the Penal code Act while at the same time managing an unlawful Society contrary to section 57 of the Penal Code Act, the man said he was called Joshua ‘Jesus Christ.’
However it emerged that Joshua had denounced the title of ‘Jesus Christ’ and disbanded his cult in Nakaseke District in August 2016 where he had been charged over the same offences.

Joshua who was then calling himself Solomon Ssemakula alias Jesus Christ disappeared shortly after Kiwoko Grade I Magistrate’s Court in Nakaseke District released him on bail in July 2016.
He was early this week re-arrested in Luweero District with the same title claiming not to be under any secular authority including the President of Uganda.
READ:VIDEO: ‘Jesus Christ' tells believers he lied to them, asks for forgiveness
ALSO READ:Duped into cultism

He was arraigned in court along with three of his followers and remanded to Butuntumula Government Prison in Luweero District until November 22, 2017 when they will appear before Chief Magistrate Juliet Hatanga for hearing.


VIDEO: ‘Jesus Christ' tells believers he lied to them, asks for forgiveness

A self-styled cult leader, Jonathan Ssemakula who has been claiming to be Jesus Christ in Nakaseke District has dropped the claim and disbanded his cult shortly after being granted Court bail by Nakaseke Grade I Magistrate.
Jonathan Ssemakula, who appeared before Nakaseke Grade I Magistrate Nasur Magomu on Wednesday, was granted bail after presenting sureties and will report for hearing of the case at the same Court in Kiwoko Town on August 10.
Prosecution had earlier told Court that Ssemakula Jonathan Solomon while at Togo village in Kapeeka Subcounty between the Months of May and June 2016 belonged to an unlawful society contrary to section 56 (1) and 2 (a) of the Penal code Act while at the same time managing an unlawful Society contrary to section 57 of the Penal Code Act.
Ssemakula who addressed his followers outside Court after he had been granted bail begged for forgiveness because he was the reason as to why they were in prison and at court and not Jesus Christ the Messiah.

“I denounce the title of Jesus Christ because I am not the Messiah. I have made up my mind because I have now realized that there is only one Jesus Christ whom we should all expect anytime,” Mr Semakula declared.
“I advise all of you to go back to your respective areas and embark development programmes. It is true that many of you believed in the message I always told you which was misleading,” Ssemakula confessed.

Authorities in Kapeeka Subcounty , Nakaseke District claim Ssemakula Jonathan is part of a cult which was disbanded by Police in 2010 when they camped in the area. The group according to Kapeeka Subcounty LCIII Chairperson Mr Moses Ssenfuma mobilized against immunization programmes and discouraged members from enrolling their respective children in school.

By Dan Wandera & Eseri Watsemwa
On July 2, Solomon Jonathan Ssemakula,47, stunned the world when he grimed through his teeth to claim he was the Messiah, Jesus Christ.
He had been arrested and aligned at Nakaseke police station for leading a cult-like group of people that allegedly ate raw food and only prayed to Ssemakula’s twisted evangelism for deliverance and healing.

Many people laughed off the joke yet others ‘diagnosed’ the cult leader as a mad man who would benefit from psychiatric assistance.

His actions, police said, were a threat and he was, together with nine others, arrested and aligned before court and charged with convening and managing an unlawful society.
In his first days of arrest and trial, Ssemakula would grim through his teeth maintaining that indeed he was the Messiah and whoever was challenging him was just ignorant.
However, in August after he was acquitted of the crimes, Ssemakula in a show of broken resilience asked a handful of his followers at the Kiwoko Grade I Court in Nakaseke District to forgive him for misleading them into believing that he was ‘Jesus Christ’.
This, to those who knew him, was another of his antics that he had exhibited at his End Time Gospel church that taught followers not to go to hospital when they are sick and only seek deliverance from Ssemakula.
But for his followers, the calm but yet measured apology was a rude awakening as some said they had wasted time and even gone to prison for a man who they had resolutely believed to be the ‘Messiah’.
Posted by Kizitomg at 06:28