When the US could not risk being dirtied by its Neo-liberal dictator : US critcises Uganda’s 2016 election says Ugandans deserve better : Ugandan election commission lacks 'independence': EU observers 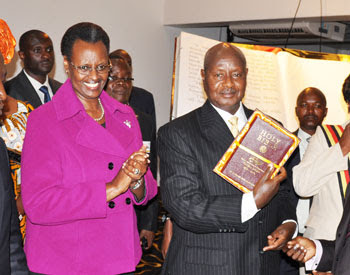 On the Results of Uganda's Presidential Elections


The United States commends the Ugandan people for participating actively and peacefully in the February 18 elections. While the vote occurred without major unrest, we must acknowledge numerous reports of irregularities and official conduct that are deeply inconsistent with international standards and expectations for any democratic process.

Delays in the delivery of voting materials, reports of pre-checked ballots and vote buying, ongoing blockage of social media sites, and excessive use of force by the police, collectively undermine the integrity of the electoral process. The Ugandan people deserved better. We are also concerned by the continued house arrest of opposition presidential candidate Kizza Besigye. We call for his immediate release and the restoration of access to all social media sites.

We encourage those who wish to contest the election results to do so peacefully and in accordance with Uganda’s laws and judicial process, and urge the Ugandan government to respect the rights and freedoms of its people and refrain from interference in those processes.


KAMPALA, Uganda — The United States called for the release of Uganda’s chief opposition leader, Kizza Besigye, who has been under house arrest since Friday, before President Yoweri Museveni was declared the winner of a presidential election marred by widespread irregularities.
Mr. Museveni won last week’s vote with more than 60 percent of the vote, according to the electoral commission; Mr. Besigye had 35 percent.

“We call for his immediate release and the restoration of access to all social media sites,” the State Department said Saturday evening. “Delays in the delivery of voting materials, reports of pre-checked ballots and vote buying” and “excessive use of force by police” had undermined the vote, it said.
“The Ugandan people deserved better.”


Mr. Besigye was arrested Friday after the police stormed his party’s headquarters. He was there tallying votes, which his party said included wins at polling sites in Uganda’s north, in Kampala and in other areas of the country. The election ran smoothly around the countryside, according to electoral observers, but not in Kampala, the capital, where opposition parties get much of their support. Voting there started up to seven hours late because the ballot papers were not available.
Mr. Besigye rejected the electoral commission’s results.


On Sunday, access to social networking sites remained blocked. Equally critical, mobile-money services — the equivalent of using a debit card — also remained blocked.
Both Mr. Besigye, as well as another candidate, Amama Mbabazi, the second-most popular challenger, and until recently the prime minister, remained under effective house arrest. Gen. Katumba Wamala was also said to be under scrutiny, after results showed Mr. Museveni had not performed well at the polls at army barracks. A Uganda army spokesman said soldiers were “free to choose anyone they want.”

“Democracy is on trial,” Mr. Besigye said on Twitter, through a virtual private network.
Everything seemed so different last weekend. In elegant dress and sharp suits, the country’s elite rubbed shoulders and cameras followed candidates on the red carpet, as Ugandans watched their president publicly debate politics for the first time. There were several sharp exchanges, but the historic moment was heralded as metamorphic.

Since then, Mr. Besigye has been arrested four times, and at least two people have been killed and over 20 injured in rioting that the authorities have combated using tear gas and clubs.
“The state can do even more,” President Museveni said, in response to clampdowns on communication. “People who think the state is something to joke, that is just a test.” He also hinted he would be ready to work with Mr. Besigye and Mr. Mbabazi if they returned to his governing party, a sign that mediation from foreign powers could become effective.
As night fell on Sunday, so did the veil on the Internet, and underneath lay the silenced remains of Thursday’s anguish.

“I wll never vote ag’n,” read a Twitter post from one voter who wrote that Mr. Besigye had 1,256 votes compared with 628 votes for Mr. Museveni at his polling site when the results were tallied Thursday. But the commission had said Mr. Museveni garnered 827 votes and Mr. Besigye 260.
One screenshot posted to Twitter of results suggested that Mr. Museveni had earned 760 votes, compared with just two votes for Mr. Besigye, at a polling station with only 437 registered voters.
A video posted online showed voters at one polling site seemingly voting on torn rips of school notebook paper.

“Voice stolen thru ballot stuffing & cheating,” read a Twitter post from Winnie Byanyima, the wife of Mr. Besigye, a political force herself, and the executive director of the charity Oxfam International.

European Union observers on Saturday criticised Uganda's elections, saying the electoral commission lacked transparency and accusing the police of using heavy-handed tactics in detaining an opposition candidate.
The EU report comes as President Yoweri Museveni eyes a fifth term in power with a clear lead, hours before expected final poll results, with his closest rival under police guard at home.
While "voting was conducted in a calm and peaceful environment in the vast majority of the country", the EU observers noted a "lack of transparency and independence of the Electoral Commission."
The election was disrupted in the capital Kampala by the late arrival of ballot boxes and papers and angry demonstrations by frustrated voters that police quelled using tear gas.
At nearly 28,000 other polling centres voting passed off smoothly, but voting was extended for a second day on Friday in 36 places after delays.
Commonwealth observers echoed similar concerns.
"Key concerns...(were) the increased prevalence of money in politics, the misuse of state resources - which led to significant advantages for the incumbent - and the competence, credibility and ability of the Electoral Commission to manage the process effectively and impartially," the 13-nation Commonwealth Observer Group said, headed by former Nigerian president, Olusegun Obasanjo.
"The inexcusable delays of supply of material to polling stations, particularly in Kampala and its environs, and other deficiences in the process... have seriously detracted from the fairness and credibility of the result of the elections."
Opposition leader Kizza Besigye was arrested for a third this week on Friday, and remained under police guard at his home on Saturday.
Police surrounded his Forum for Democratic Change (FDC) headquarters on Friday, firing tear gas and using water cannon, before storming the building and arresting him, saying they wanted to prevent him from unilaterally proclaiming his vote score.
"This action severely violates freedom of expression," the EU said, also criticising the domination of Museveni's ruling NRM party.
"The National Resistance Movement (NRM's) domination of the political landscape distorted the fairness of the campaign, and state actors were instrumental in creating an intimidating atmosphere," it added.
Museveni, 71, and Besigye, 59, were once close. They fought together in a bush war to overthrow Uganda's first post-independence leader Milton Obote, during which Besigye served as Museveni's trusted personal physician.
EU members appealed to the rivals to find a peaceful solution once results are announced.
"It is essential that the challenges facing Uganda will be resolved within the democratic process in a peaceful manner," said Jo Leinen, a European MEP lawmaker from Germany.
Posted by Kizitomg at 01:47