Uganda Pastors Expose Pastor Benny Hinn’s Sodomy escapades with Top Kampala Pastor.Tabloid insists that this is the cause of Marriage break 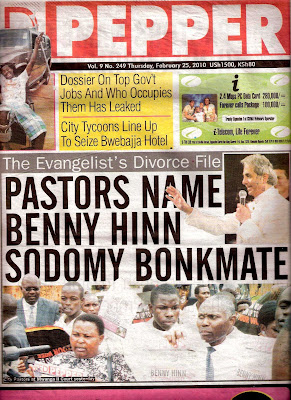 When celebrated international pastor Benny Hinn visited Uganda last year, the media dutifully reported that the “lame walked, the blind had their eyes opened, the deaf heard and the sick recovered”. However, there are certain things the media did not capture. It has been revealed that while in Kampala, Hinn sodomised a senior male pastor.

According to the divorce papers filed by Suzanne Hinn, wife to the renowned preacher, evangelist and healer, he sodomised a prominent Kampala pastor while on the Ugandan trip.

Hinn was first in Uganda with Suzanne in 2007 from June 4 to June 6, for the ‘Fire Conference’ at the invitation of Pastor Robert Kayanja of Miracle Centre, Rubaga. Last year he came back, again at Kayanja’s invite for another conference but this time without her. Participants had to pay USD50 (Shs100,000), unlike the previous time, to take part in the conference.According to the documents Suzanne filed in a Los Angeles Court, during this second conference, Hinn had ‘an affair’ with a Ugandan male pastor at his home in a Kampala suburb. 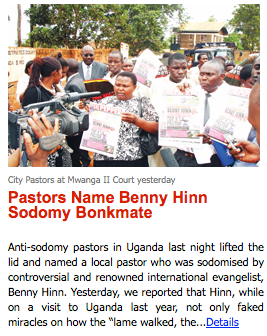 Prosperity gospel televangelist and faith-healing-cum-artist Benny Hinn has failed to heal the desire of his wife to get away from him. The internationally acclaimed televangelist’s wife filed for divorce early this month because of “irreconcilable differences” pointing to his obsession ….. with young boys, among other reasons.

GOD SPANKS
Years ago, Benny Hinn was on TBN channel and said: “Don’t just pray that God blesses Benny Hinn but that He spanks Benny Hinn if he ever needs a spanking.”

And he has got exactly what he bargained for - the Kampala pastor spanked him, now he is paying the price.Suzanne filed in Orange County Superior Court, Los Angeles for divorce from the high-profile pastor, whose reputation as an advocate of the prosperity gospel has attracted millions of followers, and criticism from lawmakers and watchdog groups over his lavish lifestyle in equal measure.

Suzanne cited irreconcilable differences which critics reveal are related to his obsession for ...., after more than 30 years in marriage.
The Court papers note that the couple separated on January 26 after Suzanne learnt about the Kampala debacle, and that Hinn has been living in Dana Point, a wealthy coastal community in southern Orange County, spanking and bonking young boys.

Sources close to Suzanne reveal that she was tired of living with a ‘ghost’ Hinn who was always either in East Africa or Asia seeing boys and male pastors.

According to Court documents, Suzanne had spent more than a year without seeing Hinn’s …. She tells Court that since last June’s Kampala trip, the couple’s life has never been the same. “I was later told he got a male companion and he is the one making him busy,” Court documents say. Hinn’s wife, who is represented by a prominent Los Angeles divorce attorney, Sorrell Trope, filed for divorce on February 1 over irreconcilable differences.

Hinn’s many followers will likely want to know why their leader, so blessed with wealth, health and a seemingly loving family, is going through a divorce. According to papers, the couple split on January 26.

Hinn, who is one of several featured personalities on the Trinity Broadcasting Network, is currently under investigation by Senator Charles Grassley over whether he is fully compliant with IRS rules regarding religious non-profit organisations. Hinn claims on his website that 88 percent of the money he collects is put back into ministry.

He travels in his private zillion-dollar jet named “Dove One” and is said to own more than a dozen luxury mansions around the world.
Everyday in every city, some elderly pensioner eats cat food in order to send Benny Hinn a donation.

Hinn’s TBN co-founder, Paul Crouch has also been mired in controversies. In September 2004, he paid a former employee, a USD425,000 (Shs800m) formal settlement to end a sexual harassment lawsuit. Lonnie Ford alleged that he was forced to have a homosexual encounter with Crouch under threats of job termination at a network-owned cabin at Lake Arrowhead in 1996. TBN officials acknowledge the settlement.

In reaction to the news, Benny Hinn Ministries said in a statement: “Pastor Benny Hinn and his immediate family were shocked and saddened to learn of this news without any previous notice.

Although Pastor Hinn has faithfully endeavoured to bring healing to their relationship, those efforts failed and were met with the petition for divorce that was filed without notice.”

Benny Hinn is probably the world’s most famous preacher.
His TV broadcasts on the Trinity Broadcast Network, a pentecostal broadcasting powerhouse, and other TV networks are watched by millions of people around the world nearly everyday.

He globe-trots in a personal jet dubbed Dove One, holding miracle and healing crusades.

Hinn is best known for his spiritual healings at events he calls “Miracle Crusades” but looks like he’s powerless when it comes to saving his marriage.

Anti-sodomy pastors in Uganda last night lifted the lid and named a local pastor who was sodomised by controversial and renowned international evangelist, Benny Hinn. Yesterday, we reported that Hinn, while on a visit to Uganda last year, not only faked miracles on how the “lame walked, the blind had their eyes opened, the deaf heard, the sick recovered” but also shattered Side B of a top-notch pastor in the country. We further revealed that Hinn’s romps with the pastor culminated into a divorce petition which his wife, Suzanne Hinn filed before a Los Angeles Court last month.

Suzanne filed the papers in Orange County Superior Court, citing irreconcilable differences which, sources, say are related to his obsession with whoppers. The Court papers note that the couple separated on January 26 after Suzanne learnt about the Kampala debacle, and that Hinn had been living in Dana Point, a wealthy coastal neighbourhood in southern Orange County, spanking and bonking young boys. Sources close to Suzanne reveal that she was tired of living with a ‘ghost’ Hinn who was always either in East Africa or Asia seeing boys and male pastors. City Pastors Solomon Male and Simon Kyazze yesterday named Hinn’s sodomy bonkmate in Uganda but we can’t reveal the name of the pastor here for legal reasons.

Male and Kyazze, while at Mwanga II Court yesterday, shouted on top of their voices the name of the sodomised pastor as they held copies of yesterday’s Red Pepper which carried a screaming headline ‘BENNY HINN SODOMISED KAMPALA PASTOR’.
Pastor Male shouted: “We know him, we know the pastor who was sodomised. He is Pastor… Very soon his wife will also divorce him.”

In an exclusive interview with this tabloid, Male revealed that he was not surprised to hear that Benny Hinn sodomised Pastor… because it was not the first time.
He said: “It’s not the first time. He has been sodomising many pastors around. I’m not shocked. Benny Hinn’s co-founder at TBN Network, Paul Crouch resigned from ministry in his Church after he had sodomised his employee and had to pay him USD425,000 for the information not to be published in the media.”

In September, 2004, Crouch paid a former employee, Lonnie Ford a USD425,000 (about Shs800m) formal settlement to end a sexual harassment lawsuit.
Ford alleged that he was forced to have a homosexual encounter with Crouch under threats of job termination at a Network-owned cabin at Lake Arrowhead in 1996. TBN officials acknowledge the settlement.

He added that Hinn had an advance team of followers whom he paid to fake different categories of miracles and diseases which he later claimed to have cured after prayers.

“Benny Hinn is part of the false prosperity gospel responsible for defrauding millions of people worldwide who are desperate for a breakthrough in social, economic, physical health, political, security and intellectual aspects, among others. “He is like a rotary owner who targets the desperate and is among the many preachers today involved in religious merchandising where God, Jesus and Holy Spirit are catch words,” said Pastor Male.

He added that Hinn’s plight, troubles and evils must be an eye-opener for Ugandans who think their pastors can’t go wrong, especially those desperate to pay for Visas, marriage healings and any other breakthrough.
“It’s high time people woke up and stopped hoping for good things from the West,” Male said.

He and his colleagues praised ‘The mighty Pepper’ for the work well-done, saying it was time to bring evils done in the darkness to light.
Posted by Kizitomg at 01:09